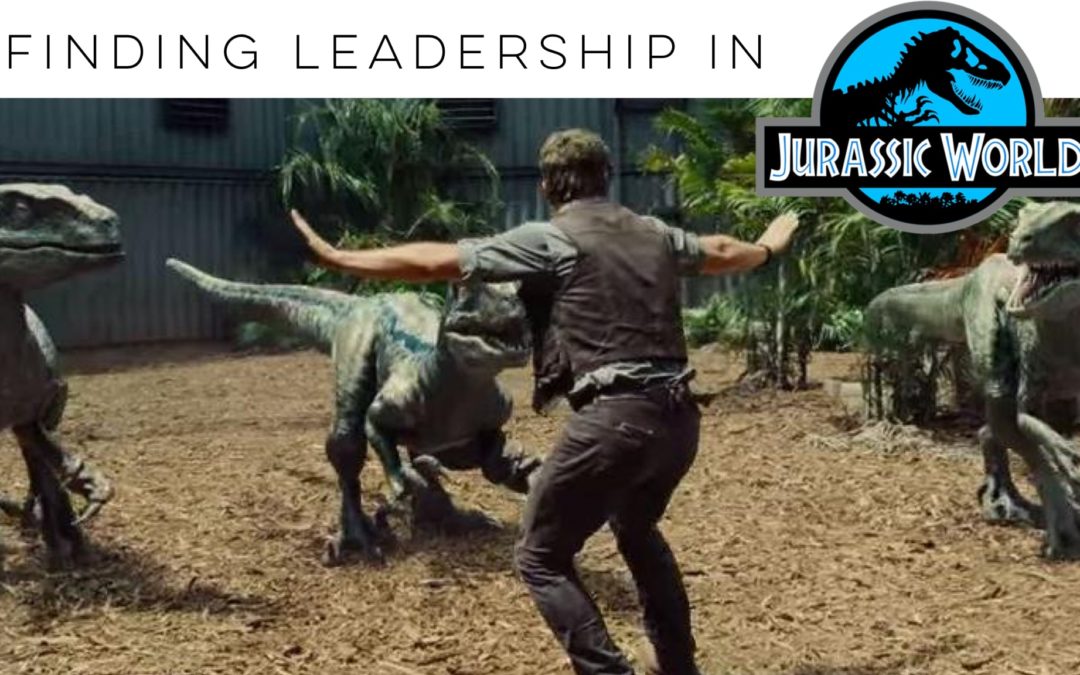 I know why we’re here.  A rescue op, save the dinosaurs from an island that’s about to explode.  What could go wrong?
-Owen (Chris Pratt)

Jurassic World is one of the highest grossest movies ever made and for good reason. It’s got a relatable hero, action, drama, and of course dinosaurs. Through two movies (and an upcoming third), we see Owen and the gang navigate all sorts of dangers while strengthening their relationships with each other. There are a few leadership lessons that we can learn from a dinosaur trainer.

Owen is certainly a leader that remains calm under pressure. You see this at the beginning of the first movie as he is training the velociraptors and then continue to see it play out over the next two movies. In several scenes, Owen stays calm under chaos and lives as a result, while those around him that can’t handle the pressure and don’t make it out alive.

Being level-headed in tough situations will serve you well. Understand where your strengths and weaknesses are in regard to your reaction in challenging situations. For me, it’s easy to remain calm in crisis situations while I have to be more mindful while dealing with people who are generally angry and lash out at others.

Remember that being a calm person doesn’t mean you have to be a bump on a log with no personality. Owen is witty, sarcastic, and funny. Be yourself and keep calm when the pressure mounts.

People who fail to learn from the past often repeat it

The underlying principle in Jurassic World is people repeat their failures when they don’t learn from them. Strip away some of the fluff and Jurrasic World is exactly like the original Jurassic Park. Nice park, everything looks great, an evil person tries to steal Dinosaur IP, Dinos get loose, run for your life.

Failure is needed for you to grow as a person and for your company to grow. It shows that you are trying new things and continuing to push forward in your journey of growth. We sometimes have a tendency to be ashamed of those failures and quickly try to sweep them under the rug and move on.

Take time to reflect on the whys and reasons behind the failure. It will teach you valuable lessons and help you move forward in a healthy way.

A classic scene in all of the Jurassic movies is the early celebration. It’s like the helicopter pilot in Jurrasic World who thinks he made it out only to be eaten by a giant dinosaur in the end. Make sure that you celebrate your wins with your team and yourself, just not too early. It’s cost athletes their win, companies their lead, and embarrassment for others.

Make sure it’s a done deal and then party.

Leaders have to put themselves between danger and their team

Videos that show people putting themselves in harm’s way to save or help someone else regularly go viral on the internet. Almost always, it’s a regular person and complete stranger to the one that needs assistance. We love a good hero that sacrifices their safety for those of others.

Owen puts himself between his friends and danger constantly in the new Jurassic World movies. His concern is obviously higher for those he cares about above himself. What monsters out there have you have thrown yourself in front of to protect your friends, family, and co-workers?  Maybe it’s not a killer dinosaur, but perhaps it was a bully, a safety issue, or a tough conversation in a meeting. I often see my role as a leader as a shield to keep as much of the garbage from hitting my team as possible. A good leader does what needs to be done to protect their team.

Live your life like a good dinosaur trainer. Be brave, level-headed, and learn from your mistakes. Step up to help others and celebrate after you’ve accomplished your goal.