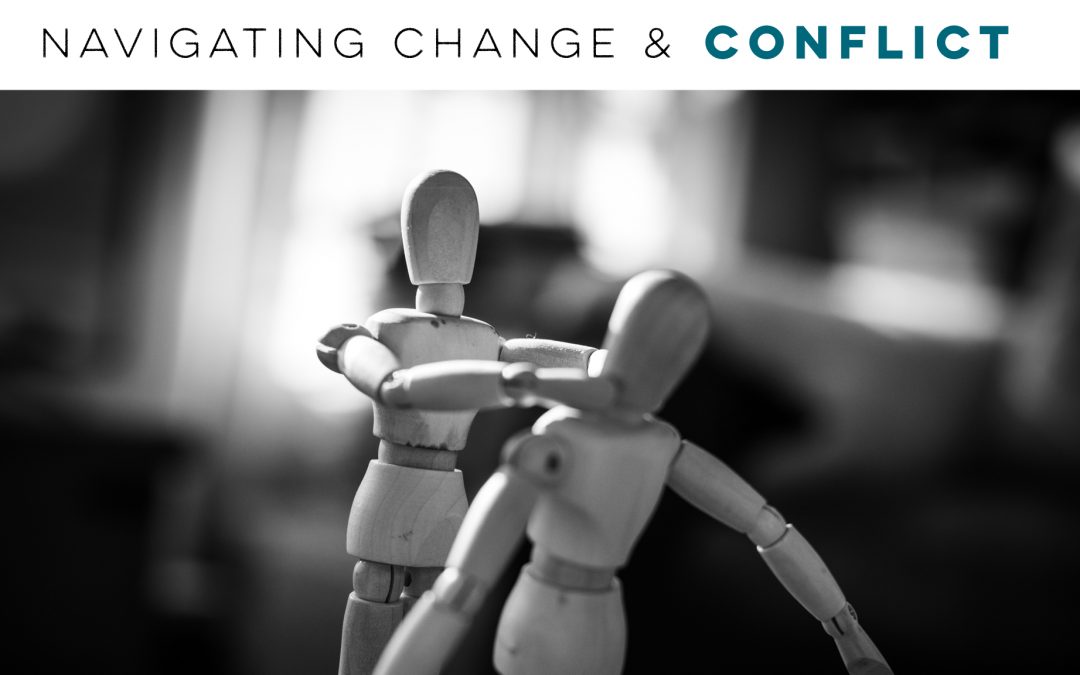 Life is full of conflict and changes whether we like it or not. Look no further than the last two years across the world to see how change and conflict have impacted each of us in a personal way. While we generally don’t like conflict on a personal level you are guaranteed to encounter it as you continue to grow in your leadership.

Here are some steps to help you navigate those times of conflict and change well.

Know which battles are worth fighting

Sometimes we consider ourselves peacemakers or a neutral party and want to get involved to mitigate the conflict and help find a resolution. While rooted in great intentions, your involvement may actually make the conflict worse by adding an unneeded layer of complexity to the situation.

If you’ve got two people on your team that are in conflict, step back, and assess when you need to get involved. It’s better long term if they can work it out amongst themselves without your involvement. They will both grow from the experience and lead to less of a reliance on your intervention in future flare-ups.

Not all conflict requires your involvement. Guage when the appropriate time to enter the conversation is. Jump in too early and people begin to rely on you for every little conflict. (Think of a child running to his mom every time something doesn’t go their way) Wait too long and you lose trust and credibility as a leader as the problem grows and escalates.

Steer clear of assumptions and investigate instead

Assumptions can get us in trouble with other people because the picture is often not as clear as we think it is. We then fill in the blanks based on our perspective or experience. Think of any normal change or conflict as a giant color by number picture with some of the numbers missing. Yes, it’s easy to fill in the spots that are clearly labeled, but it becomes a bit more difficult to fill in the rest.

Some questions that you may ask yourself to help fill in those gaps include:

Once you hear about or observe and conflict that requires your attention, take time to listen to both sides individually if possible.  Come into the conversation with care and empathy to set the right tone with the person. “Scott shared about a billing issue that happened yesterday. What’s your take?” As you listen, ask a lot of questions for clarity. Taking an inquisitive and curious approach will keep the person’s defenses down and allow you a chance to hear their honest perspective on the situation.

Once you have all the information you need to decide your next step and level of involvement. Some of those roles include:

Make sure that you don’t take too long to get to and through this phase. Unresolved conflict only hurts other areas of the business and relationships.

Find the balance in intervening in the conflict. Know when to stay out of it and when it’s time to jump in.