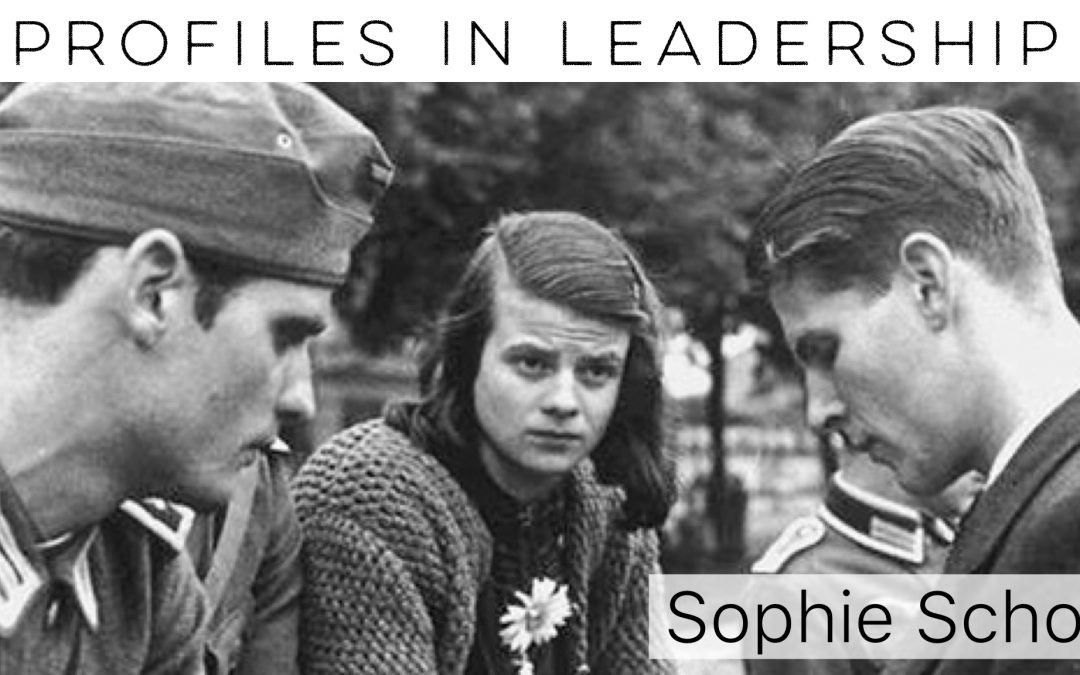 Just because so many things are in conflict does not mean that we ourselves should be divided.
-Sophie Scholl

Scholl grew up in Nazi Germany where she began passively resisting the teaching and programs as early as 13-years-old and through a small group of friends eventually lead a passive resistance movement centered around the philosophy that was a counterpoint to the Nazi propaganda machine. She held true to her beliefs as she was eventually caught and executed for high treason at the age of 21.

Sophie Scholl is a powerful example of integrity, accountability, and passion and she modeled several leadership characteristics that we can learn from today.

She leaned into her talents to contribute to the right cause

Scholl was no warrior. Rather than trying to defect to the Allied side during WWII, she leaned into her talents to make an impact where she was. She and a small group of friends began a passive resistance movement against the Nazi regime by writing articles and distributing leaflets around central Germany and the local university. The group and publication became known as the White Rose and several publications were distributed during the summer of 1942

What difference can you make? It’s sometimes hard to see how we as individuals can impact large-scale issues like climate change, racism, and false narratives. Instead of becoming overwhelmed with the enormity of the situation look at your skills and talents. What are you great at or love to do and how can you use that skill and passion to contribute in some way?

The White Rose was a group of 5 kids and young adults who wrote, printed and distributed the material. During the spike in Black Lives Matter protests in the Spring of 2020, a high schooler in the Atlanta suburbs organized his own protests that saw hundreds of people unite from all walks of life. Don’t underestimate the level of impact that you can have on others.

She spoke up at a time that mattered

As time continues to separate the most current generation from at atrocities of the Nazis and the circumstances that led to WWII, people sometimes assume that the whole country backed the misguided values and mission of the Nazi leadership. That was certainly not the case. Sophie Scholl was one of many citizens in the country that voiced their concern and call to resist as the regime expanded across Europe.

Groupthink is the way of making decisions that discourage individualization and creativity. It has destroyed organizations, toppled governments and in the age of social media, led to people taking up sides with groups that they never should have been a part of.

Speak up to share your opinion in group meetings and gatherings. We conduct talent calibrations where leaders discuss their team with their peers and supervisor and talk about each individual’s performance and potential and we always learn new things about people in each session because we encourage everyone in the room to share their insight and dealings with the person currently being discussed. We can put up blinders when it comes to our people and as we lead strategically in both our personal and professional life.

Be intentional to break up groupthink if you see it manifesting itself on your team and have the courage to step up and make your voice heard.

She was brave and accountable

Sholl and the rest of the White Rose were arrested for distributing the sixth leaflet at the University of Munich on February 18th, 1943. The group was making a run of dropping off the sixth leaflet through the main building on campus. They had a suitcase full of the printings and left stacks outside the classes so the students would find them after class was over. Sophie found a few remaining copies still in the suitcase and threw them from the top floor down into the atrium. This unplanned action was observed by the university maintenance man, who reported them to the Gestapo

They were arrested and taken into custody where the interrogator initially thought that Scholl was innocent. After her brother confessed, Sophie assumed full responsibility in order to protect the rest of the White Rose. The Gestapo moved quickly in the case. In just 4 days after the arrest, the group was put on trial, found guilty, and were executed by guillotine.

Scholl could have easily denied her involvement and may have gotten away free, but instead, she took responsibility and it ultimately cost her her life. Accountability is not always about life and death consequences, but your integrity and word do hold value. What is your word worth to those around you? (EP 179)

Your team, family, and friends are counting on you to hold onto your integrity. If you believe in something, be willing to stand up for the idea or value during tough times. Instead of lashing out when standing up for your value and position, own your stance, and present it in a caring and empathetic way.

Lean into your talent and passion to leverage your values to impact others. Follow your conscience as you break up group think, own your intentions, and embrace accountability for yourself and others.