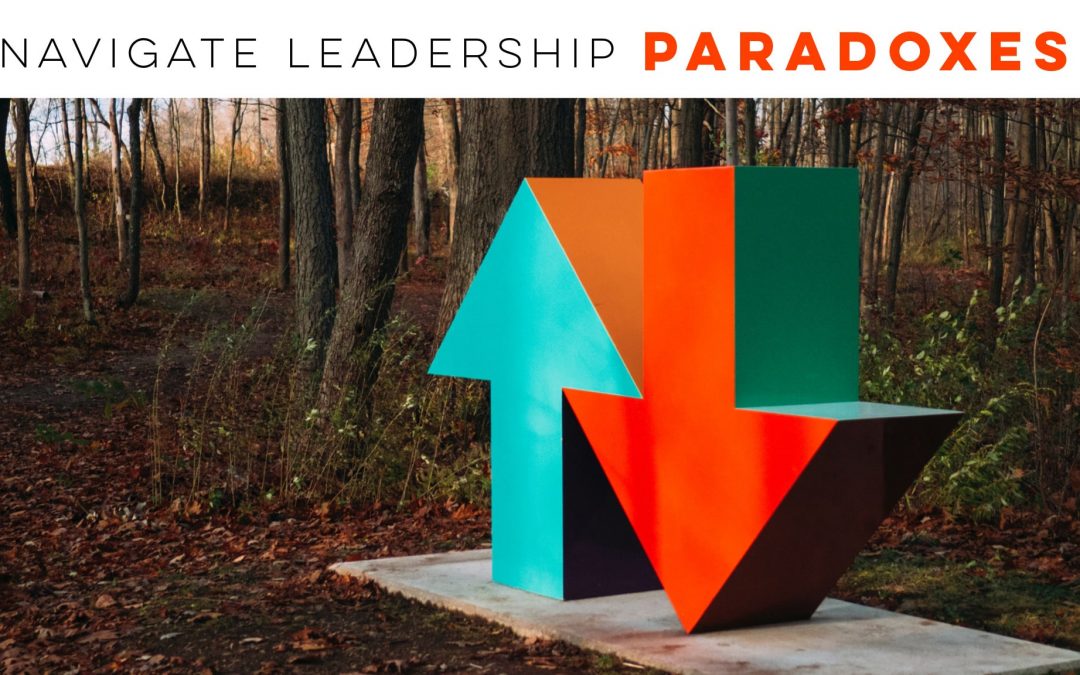 If complexity doesn’t beat you, then paradox will.
–Tom Robbins.

Paradoxes are “contradictions that persist over time, impose on each other and develop into seemingly irrational or absurd situations.” Maybe those kinds of absurd thoughts or situations pop up in your everyday work. You may not realize it, but you probably deal with paradoxes more than you realize. Being able to identify them and successfully work through those are key to a great career.

Each paradox that you encounter requires some kind of decision or action by you and the team. When looking at two opposing views, thoughts or actions look at these approaches to determine how you will address the situation. We’ll use the paradoxical phrase “Tough Love” to drive home the examples of each approach.

Either-Or: The Either-Or approach refers to your choice to assign priority or privilege to one side and either ignore or dismiss the other side so that they never intertwine and become a paradox in the first place.

The Tough Love Example: You’ve heard the phrase before in parenting, sports, and maybe even in the workplace. It’s the idea of being tough on someone to hold them accountable with the ultimate goal to help them improve because you care about them. With Either-Or, it’s going to be one way or the other. Either you are tough on someone, or you love on them; they can’t exist in the same space.

Both-And: The Both-And approach looks at the two ends of a paradox and says that both are valid both should be acknowledged and work together. This is the most common approach that leaders take when dealing with paradox.

The Tough Love Example: With Both-And, the leader says that both points are valid. They need to be tough on expectations and soft on people. It’s a balanced approach that acknowledges the conflicting points. The leader here would approach the conversation with empathy and thoughtfulness while holding true to the expectation.

More-Than: The More-Than approach is increasing in popularity among leaders that deal with paradoxes. Here they look at the two opposing sides and say that each can’t be in perfect harmony in the real world. One side has to weigh more than the other.

The Tough Love Example: The more-than approach can significantly swing the outcome of this one, and both may be appropriate depending on which side you weigh as more important.

You may weigh the love side more important when someone has dropped the ball and is being overly hard on themselves. You still need to establish expectations, but they are much more critical of themselves than you would be of them.

You may weigh the tough side more when there is a critical error and the associate doesn’t show a level of care or understanding that matches the situation.


When it comes to the tough love paradox in coaching, take a strong stand, but leave room for others to maneuver. I know I sometimes throw people off that lean toward the tougher side. It has taken me time, but I can be quite tough and loving at the same time. You can as well with continued practice. I’ve been asked several times if I really do help people that are struggling in our find a role that is a better fit for them. I do. Our standards and expectations do not change but that doesn’t mean that we shouldn’t care about the individual if they aren’t performing well.

The paradox comes when you have to present an idea or program when you don’t think in the same way or you don’t agree with the direction yet. Don’t let it be known to those that report to you that you are not fully on board. Your role as a leader is to manage the vision and mission. Dealing with paradoxes can be challenging when the direction around the paradox is coming from somewhere else.

Thinking and acting in seemingly contrary ways at the same time may seem weird. It’s a balancing act that the best leaders can walk comfortably.